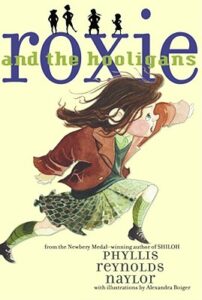 More quick, inexpensive activities, crafts, art projects, and more for children and little ones to go with the book Roxie and the Hooligans.

Arranged by chapter so as to avoid copyright issues.

Too often, we forget our parents, grandparents, and other relatives had a life before we existed. They have interesting stories to tell about their own lives and childhoods. Often, we were told some of these stories but have forgotten them. So, you will often see me suggest talking to relatives and friends and having them tell your children interesting stories from their own lives, or recording them for your children to hear after they have passed. This is another time I suggest finding a relative with an interesting story to share, and having them share it with your child, whether it be through video chat or in person. Nothing connects generations and history like hearing stories straight from the people who lived through them.

This book deals a lot with teasing in the beginning, and Roxie is genuinely scared of the bullies, so you might want to preread for sensitive youngsters. You might wish to discuss how to deal with bullies in small portions each day, as even homeschooled children might be exposed to bullies (either bullying them, or another child), and give them tools to help deal with it.

Try to come up with safety suggestions that aren’t too scary for your child, but could help them in case of emergency.

(Did anyone else read that as Helvetica?)

This chapter was kind of hard to read through and pick out things to act out. It certainly was not all that fun to read, and harder to find something to emulate. You might try toast and cocoa for breakfast like Roxie, or fish and chips for lunch like Norman.

Lord Thistlebottom’s Rule: If you are buried in an avalanche, do not panic. Dig a hole around you and spit. The saliva will fall downward, telling you which direction is up. Pretend to dig your way out of an avalanche by placing a couple (light) blankets on a table, and having your child pull them until they are “buried.” We do not advocate spitting while buried in the house. 😉

No ideas. Let me know if you have one. 🙂

Try to come up with your own bug-themed meals. Stick hard spaghetti noodles through pieces of hot dog and cook to make worms or bugs, gummy worms, bugs on a log with celery and raisins, or any of these ideas here. It’s probably a good idea to tell children not to eat the bugs in your yard. 😉

Lord Thistlebottom’s Rule: When faced with starvation, do not panic. Wrap an insect in something more pleasing and imagine yourself having dinner at Buckingham Palace. If your child is struggling to eat fake bugs, have them eat it in a more pleasant food, such as ice cream, yogurt, or pudding.

Lord Thistlebottom’s Rule: When approaching an adversary through high grass, avoid the temptation to raise your head and look around. Stay calm and do not panic. Play a game of hide and seek, but where everyone is hiding. Whoever is the first to call out the location another person is hiding is the winner.

Lord Thistlebottom’s Rule: When lost in the mountains, do not panic. Use a stick to dig a trench in the snow. Get in it and cover yourself with leaves and branches. Have your children try to find ways to hide and camouflage themselves inside and outside. Perhaps pretend to be a pile of blankets in the bedroom, or use pieces of wood to hide in the garage.

Lord Thistlebottom’s Rule: To attract the attention of rescuers, the unlucky traveler should make a large triangle out of any available material and place in a location that can be easily seen from a distance. Do not panic. Have your children explore items around the house and yard they could use to make a large triangle.

Out of the Sky

Have gingersnaps (or cookies of your choice) and lemonade together to celebrate finishing the book.

There are many books by the same author listed in the front of our edition of the book. You might wish to try some of these. One book that isn’t mentioned at the beginning of the book is Roxie and the Hooligans at Buzzard’s Roost.

Fast and Easy Extension Activities for How We Crossed the West: The Adventures of Lewis & Clark by Rosalyn Schanzer