If You Lived in Colonial Times by Ann McGovern 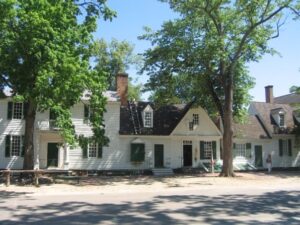 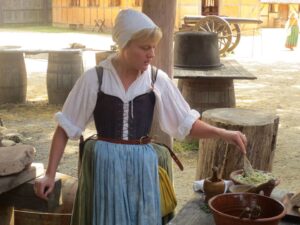 Inexpensive and fairly easy projects, videos,  crafts, and activities to go with the book If You Lived in Colonial Times by Ann McGovern from Sonlight’s HBL K program. I’ve scheduled the activities by section title/page number to avoid infringing on Sonlight’s copyrighted schedule. I didn’t have activities scheduled for some sections, so I left those blank. I primarily included videos for this book. Let me know if you have any other ideas (even for weeks already with possible activities) or if you notice any mistakes or broken links.

Before we begin, I would like to say that although it is a different time period than this book, something I feel would illustrate it significantly would be the Laura Ingalls Wilder, either the movies of Little House on the Prairie or the book series. For right now, they are accessible on Prime Video.

6-When Were Colonial Times?

Map/Questions for New England. I mostly plan to print a larger version of the map to follow along with.

Video showing a man and woman each dressing in a full costume from the period. Scroll down to the bottom of the article. There are a few activities at the bottom of the page, including a game to dress up a woman in period clothing, but requires flash to play.

9-Where Did People Buy Their Clothes?

11-Was There a Special Time for Making Clothes?

This craft looks like more work than I would usually link, but I don’t really have anything for this section, so I’ll link how to make a drop spindle for kids.

12-How Did They Wear Their Hair?

13-What Did People Eat

Actual Colonial recipes from the time period. Fun to read together or to make.

16-Did Children Have to Worry About Table Manners?

18-Did Children Go to School?

A short video illustrating a Dame School for the first 52 seconds, then they go into reading and writing schools.

18-Did They Have Schoolbooks?

A very short video about a hornbook. A video about how to make your own hornbook. For the first 3-4 minutes, they are just counting down the video, but if you fast-forward, the video is there.

20-Who Learned More–Boys or Girls?

Here is a look inside a one-room school.

A look inside the New England Primer video.

24–What Happened if You Didn’t Behave in School?

Another look into a one-room schoolhouse. Touches lightly on misbehavior—also, an explanation of whispering sticks, which don’t sound very pleasant.

26-What Books Did Children Read?

Since Aesop’s Fables is already included in Sonlight, here is the complete audiobook from Librivox of Robinson Crusoe for free, in case any children are interested in trying it out.

27-What Happened if You Were Sick?

28-What Kind of Medicines Did People Use?

A look into cooking and healing herbs used in Colonial times.

30-Were There Doctors in Colonial Days?

A short video about the roles of doctors and other types of healing.

31-What Happened if You Went Out at Night?

On the side of this page, there is a video, which doesn’t tell you anything about Night Watchmen but is kind of fun in terms of seeing costume period dress, and a parade of period characters.

32-What Did People Do on Sunday?

34-What Happened if You Fell Asleep in the Meetinghouse?

I can’t find a good video for this one, but here is a page with a few illustrations of a tithingman.

35-Where Did People Eat on Sunday?

36-What Laws Did You Have to Obey?

38-What Were the Special Sabbath Laws?

39-Could Everyone Vote in Colonial Days?

40-What Happened to People Who Broke the Law?

This site always has interesting videos, but you can only see a part of it unless you are a member, and membership is a little on the expensive side for us. But, the first bit of this video helps to explain stocks and pillories.

A look inside early colonial houses

43-How Many Rooms Did a Colonial House Have?

A video of colonial-era furniture.

46-What Did People Sleep On?

A very old silent film shows inside a Puritan house, including a trundle bed.

46-Where Did People Hang Their Clothes?

47-Where Did People Take Their Baths?

Since jobs come back in later, I will skip them for now.

50-When Did Boys and Girls Work?

If you haven’t watched these books read aloud from the book Three Young Pilgrims, they also fit in perfectly here as well.

51-Did Children Have Any Time to Play?

A video showing a couple of colonial games, and describing many others.

52-What Games Did Boys Play?

Make a homemade kite, or play any of the games on this page. The kite video I linked included older-style supplies, but you can make any kind you like.

Instructions on how to make a simple cornhusk doll. Cornhusks can be found in most ethnic areas of grocery stores, or in ethnic stores, as they are used for making foods such as tamales.

54-Were There Special Days Just for Fun?

55-Were There Special Laws About Fun?

Video of a simple colonial dance.

56-Did People Travel Much in Colonial Days?

A short video about carriage rides in Colonial Williamsburg.

57-How Did People Get Across Water?

58-How Did People Travel When There Was Snow on the Ground?

Short video of a horse and sleigh ride.

60-How Did Two Men Travel When They Only Had One Horse?

I was unaware of this, but they have modern-day ride-and-tie races. Here is a video of one.

62-How Did People Get the News?

63-How Would You Write a Letter in Colonial Days?

64-What Would You Use for a Pen and Ink and Envelope?

Downloadable old-fashioned-looking paper, with fold lines to make it into an envelope with a seal.

65-How Would You Send Your Letter?

65-How Long Did it Take to Deliver a Letter?

66-When Did the Air Service Get Better?

Who Were the Workers in a Colonial Town?

https://www.theepochtimes.com/danforth-pewter-made-by-many-hands_3358445.html, a little more modern than I would like, but it gives the idea.

78-What Was the Busiest Part of a New England Town?

80-Who Built the Ships in New England? 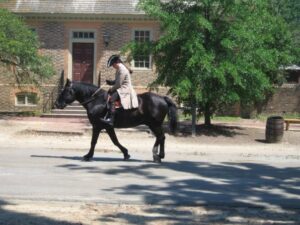 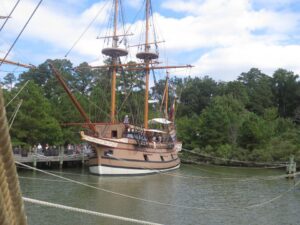 The World According to Humphrey by Betty G. Birney