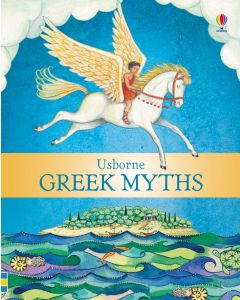 I feel very awkward suggesting too many activities for this book. I don’t want my children coloring a lot of pages about false idols, nor do I want them watching a ton of Greek mythology videos or making a lot of crafts about false gods.  So, this one will be relatively sparse on actual activities, on purpose. Keep in mind I am by no means a Biblical scholar, nor am I aware of all the teachings of all denominations, so feel free to adjust as needed.  If you have any ways you used it for your own family that might benefit others, or your family found other new connections, please share in the comments.

Ask your children if this reminds them of any story they may know.  Help them draw the connections between this story and the story of Adam and Eve, showing how one possible explanation for this myth is that some people might have heard the Bible stories but not understood or remembered them, causing them to add or change important details.  Ask them to be alert to the other stories in this book to see if any more remind them of Bible stories.

Key points that might be taken from the Bible:

If you have the book Stories from Africa, from Sonlight P 4 /5, this might be the time to reread the story about the boy and the box.

Persephone and the Seasons

The story of Persephone isn’t a direct correlation to a Bible story as the first two were, but we can see hints of the Creation story in her story.

The Story of Arachne

While I do not see Arachne as an allegory for a Bible story, we can make a few loose connections.

The Many Tasks of Heracles/Hercules

For me, Heracles most resembles Samson from the Bible. I also see some of David and a few others, so bear with me on this one. I don’t think the connections are solid, so feel free to skip ones you don’t care for. 🙂

Bellerophon and the Flying Horse

Jason and the Golden Fleece

The Chariot of the Sun

The Adventures of Odysseus

I believe the tales of Odysseus are based on a non-Biblical set of stories, but we can always find God.

Theseus and the Minotaur

Pygmalion and His Wife

I’m sure I’ve missed many wonderful talking points, so please feel free to share your own in the comments so that others can share them with their families as well.

The Year of Miss Agnes by Kirkpatrick Hill