Fast and Easy Extension Activities for George Vs. George: The American Revolution as seen from Both Sides by Rosalyn Schanzer 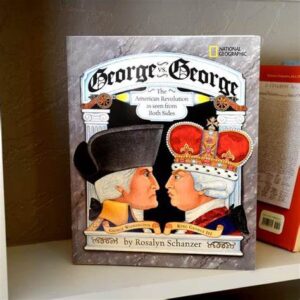 Fast and Easy Extension Activities for George vs. George: The American Revolution as seen from both sides by Rosalyn Schanzer

Projects, crafts, videos, and activities to go along with this book. I am organizing these by book section.

My first idea for this book was to make a comparison chart for the two Georges.

Printed images if you’d rather, or for non-readers/drawers.

Using the posterboard in landscape position, paste or draw images of George Washington (links under Introduction) in one upper corner, and King George(more links in introduction) in the other. Or, you can just write each persons’ name. You can draw 2 lines to make 3 columns, with a space in the middle for things they have in common, if you’d like, with either no title, or label it as you desire, or put pictures of both of them at the top.  As you read about each George, you can add the things that strike you about them in their own column, and things they had in common in the middle column. If you’d rather, you can do a Venn Diagram style image, or you can just leave it blank, and just put things individual to each on their own side and the rest randomly in the middle of the posterboard.

Other Activities that Span the Whole Book

This is a great time to add in the Famous Figures of the American Revolution book.  I will try to add a schedule for when each figure ties in separately, but if you wanted to do most of them, they fall into this time period.

Also, this is a great time to start the video series Liberty’s Kids.  Here is a list of all their episodes.

Find images of George Washington and King George online, either coloring pages, or full color images to print out and color. I’ve included some possible ideas below.  If you are savvy at printing, you can print it to size. 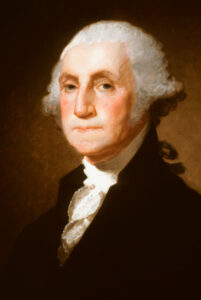 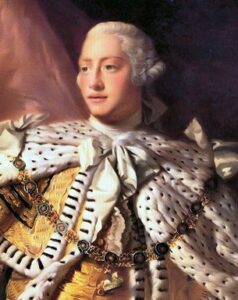 Glue pictures of George and George onto the posterboard. You can print out or write on or draw characteristics from these pages that apply to either George.

A Look at the Life of King George & His Countrymen

I don’t know if it’s because I’m doing searches from the U.S., but there is a definite dearth of King George-related art projects on google. 🙂  Perhaps one of our friends from the UK can see if there’s anything good on their end.  For the meantime, this project doesn’t really have instructions, but it looks kind of fun and easy. It looks like they used felt, markers, and yarn, but these could just as easily be made from cardstock or cardboard.  You could make them in different sizes to represent various members of the king’s family. If you have an extremely ambitious or creative child, you could also make ballad singers and more.  Don’t forget to add a few King George facts to the chart.

A Look at the Life of George Washington & His Countrymen

This chapter really didn’t lend itself to a lot of craft projects, so I chose this George Washington-style hat with wig. You will need an oversized piece of blue paper. We will use blue posterboard.  Don’t forget to keep adding to your chart.

This website has a section near the top with a radio broadcast of the differences between the governments and then a little more content as you go down the page, including a video.  You can add a difference and similarity or two to the chart.

The Trouble With Taxes

Choose some activities from the Heroes and Happenings Chapter 4: The British Acts Extension Activities page. You can also add the different rationale to your chart.

A Tempest Over Tea

Again, you can choose some activities from the Chapter 4 page.

The Shot Heard Round the World

Use Activities from Heroes and Happenings Chapter 5 suggestion page.

British Redcoat craft. They use wooden round pegs, but I think this could be about as effective using toilet paper rolls or rolled cardstock.

It was also surprisingly hard to find crafts about the Continental Army.  As such, here is an activity about the minutemen, who aren’t really mentioned in this section, but are still relatable.

While you can try any of the crafts on this page, the one I had in mind is about halfway down the page, and is called Declaration of Independence Paper Craft.

The Tides of War —Through the end of the book

This first section is rather long and scheduled over multiple days, but it’s pretty hard to find crafts of major battles. The next sections are shorter, but again, a lot of war and not a lot that is craft friendly. So, I will include a few more random activities that can span several days.

This first one is a little long and a little more intense than I usually link, but here is an activity of Washington Crossing the Delaware.

Bonus Activity for Geography from My Father's Dragon by Ruth Stiles Gannett.