The Mystery of King Karfu 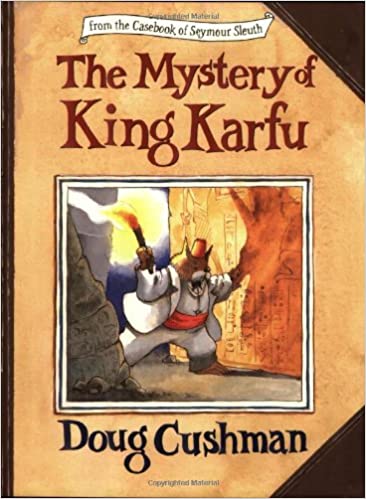 The Mystery of King Karfu

"My name is Seymour Sleuth. I am the greatest detective in the world."

Travel to Egypt with the famous wombat detective Seymour Sleuth and his able assistant, Abbott Muggs, to solve the baffling case of the missing Stone Chicken of King Karfu. Follow along in Seymour's fascinating casebook as they interview suspects, uncover clues, and catch the culprit after a high-speed camel chase across the desert. But the case isn't over yet! Decipher the secret code and discover the ancient Lost Treasure to bring the case to a deliciously satisfying close. Meet the world's greatest detective, Seymour Sleuth! Follow along in his fascinating casebook as he travels to Egypt to investigate the case of the missing Stone Chicken. If he can find the Chicken, he may be able to find the Lost Treasure of the ancient pharaoh, King Karfu. Readers will uncover clues, interview the suspects, and even decode the secret code right alongside this daring detective to discover the tasty treasure and find out . . . whodunit! Full of maps, mementos, and hilarious snapshots that chronicle this exciting case, young detectives won't be able to resist this amazing adventure.